The history of the Roto-Werke began even before the actual foundation of the company in 1921. Already in 1912, the first Roto duplicator (mimeograph) was manufactured at the Deutsche Bürobedarfsgesellschaft Bruer & Co in Goslar (DEBEGO), which later became Greif-Werke. The Roto 1 was first German-developed mimeograph. It was so successful that demand sky-rocketed. This prompted the company to separate the mechanical engineering department from the production of chemical office supplies, such as ink, stamping ink, carbon and carbonless paper, thus forming a new workshop devoted to the production of the Roto 1. The newly established Roto-Werke, was located in Königslutter, near Braunschweig, and with 41 employees it began to develop and produce duplicating machines. 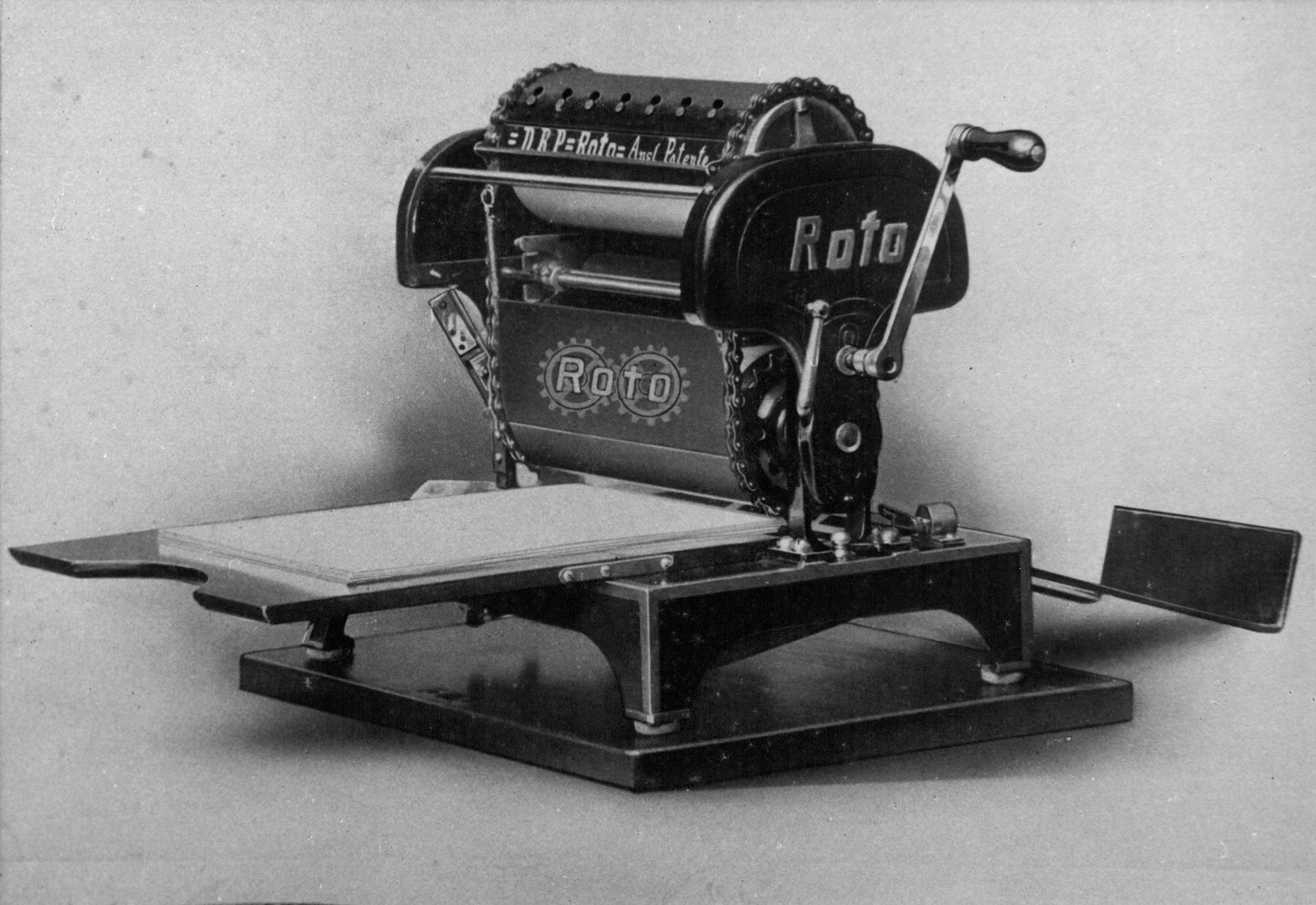 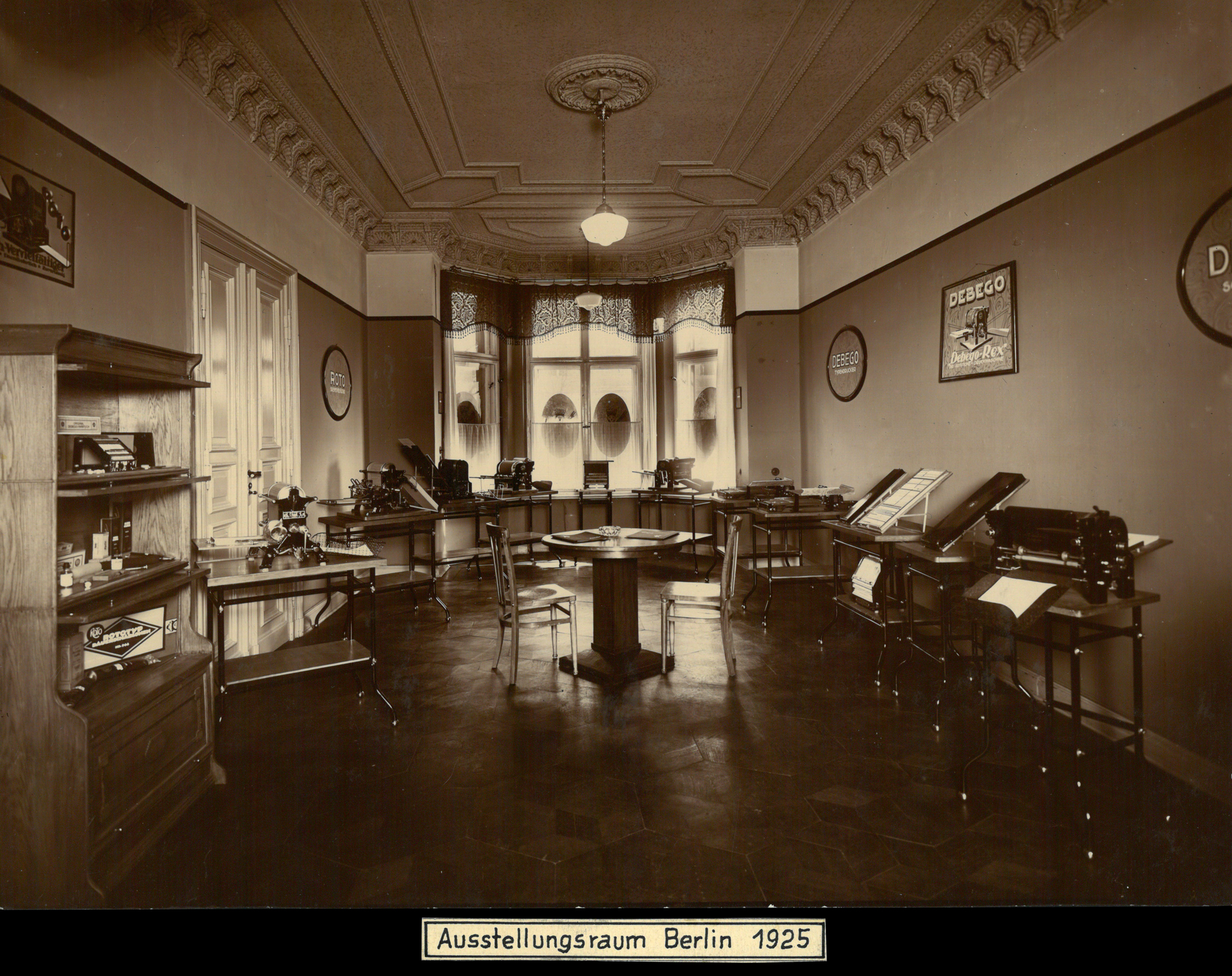 Early on Roto established a prestigious showroom in Berlin, enabling them to get ahead of competitors.

By the start of the Second World War, the number of employees had grown to 310, and the Roto-Werke produced state-of-the-art spirit duplicators and mimeographs, which were available both as hand-crank models and as electric versions. As part of the war effort’s mobilisation plan for German industry, companies were assigned certain tasks to according to suitability. This often resulted in restrictions or even discontinuation of civilian product ranges. For Roto, production switched to copper guide rings for grenades. However, the client was unable to provide the necessary measuring equipment for the precise production of the parts. This prompted Roto-Werke to manufacture such measuring instruments. Since highly qualified skilled workers were required for the production of these instruments, the company managed to negotiate for its employees to be released from military service, thus sparing them from being sent to the front. 1

Neither spirit duplicators nor mimeographs were up to the new qualitative or quantitative demands after the war. So Roto developed 1948 the Roto 50 an office letterpress printer. In principle, Roto succeeded in doing the same with letterpress as Rotaprint did with offset printing. They had simplified the process and transferred it to the office. ‘An office letterpress printer is primarily used for printing forms, simple brochures and other printed matter in large print runs. For printing, three different printing carriers are available depending on the requirements: the metal sheet, the Helio form and the Elasto rubber cliché.’ 2

The outstanding feature of this duplication technique was the print run, which could be achieved with one printing form. With the metal sheet, which was written on by hand or in the typewriter, up to 50,000 copies could be produced. The Helio-Form delivered up to 500,000 copies and was the only letterpress form that could be produced in the office itself. It could be used to transfer drawings, photos, texts and other high-contrast documents. The customer could order the third printing form, the Elasto rubber cliché, directly from Roto-Werke. One submitted his template and received the finished Elasto cliché within a few days. Print runs of up to one million copies of this plate could be printed, and it could easily be stored for years, allowing it to be used again and again. 3 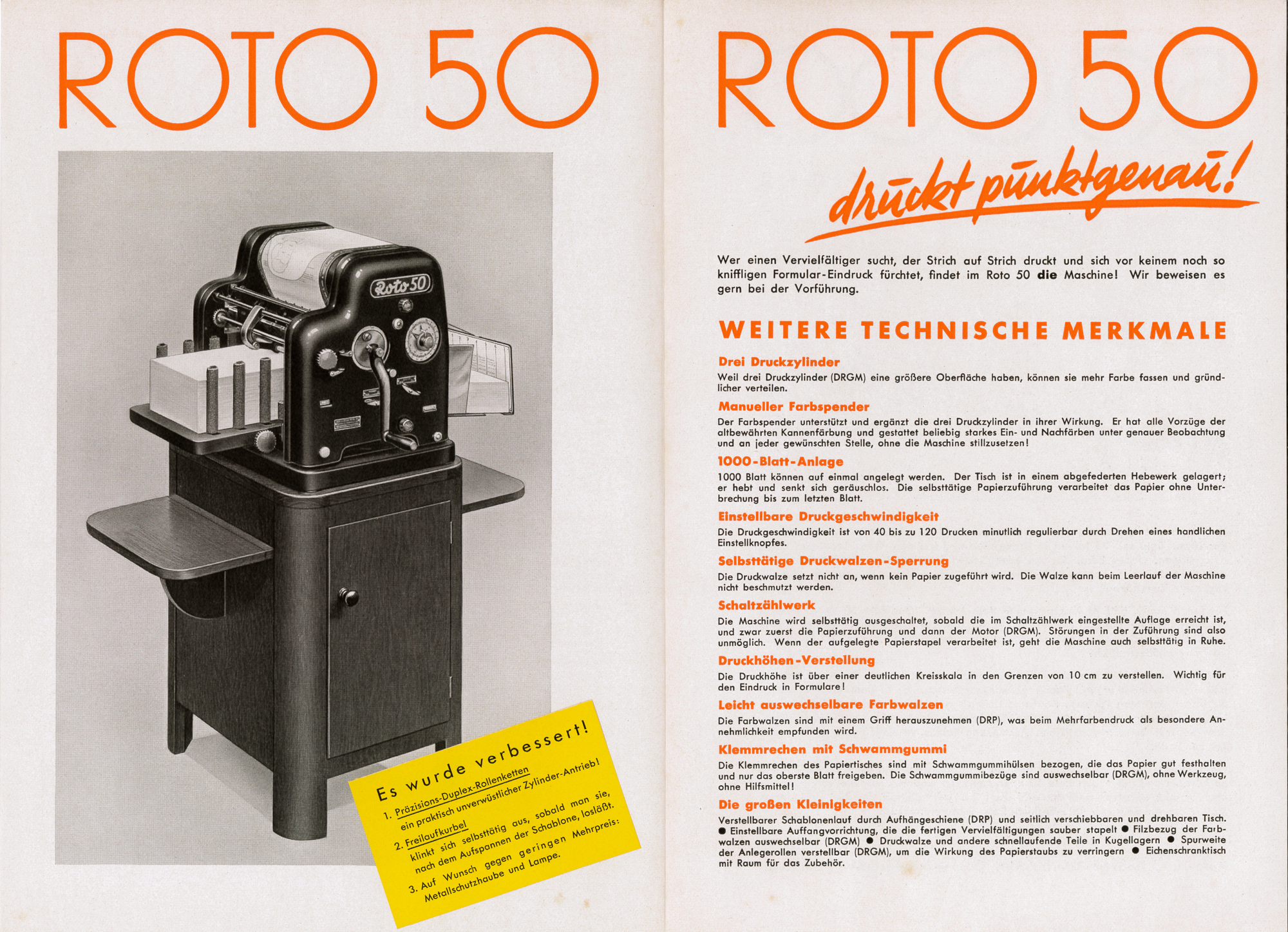 The Roto 50 was especially popular among public authorities and provided Roto with a secure income for years. 4

At the beginning of the 1960s the ownership of the company changed. The children of the company’s founder, Carl Bruer, were the sole shareholders until November 1963, when the Hanover-based banking house Nicolai became the owner of Roto-Werke. In 1965 the bank sold its shares to the company Günther Wagner in Hanover, which later became the company Pelikan. The Greif-Werke, from which Roto emerged, had been taken over by Pelikan in 1964. 5

In the highly competitive duplication market, Roto-Werke recognised realised early on that it could not survive in the long term solely as a machine manufacturer. To stand out from the competition, it became the only manufacturer to offer machines for all types of duplication. This allowed Roto-Werke to position itself more as a service provider rather than a manufacturing company. ‘Whoever, like us, offers all office printing processes can come up with real solutions to problems,’ it claimed. ‘Nowadays, it is no longer machines that are sold, but methods or, as said, problem solutions.’ 6 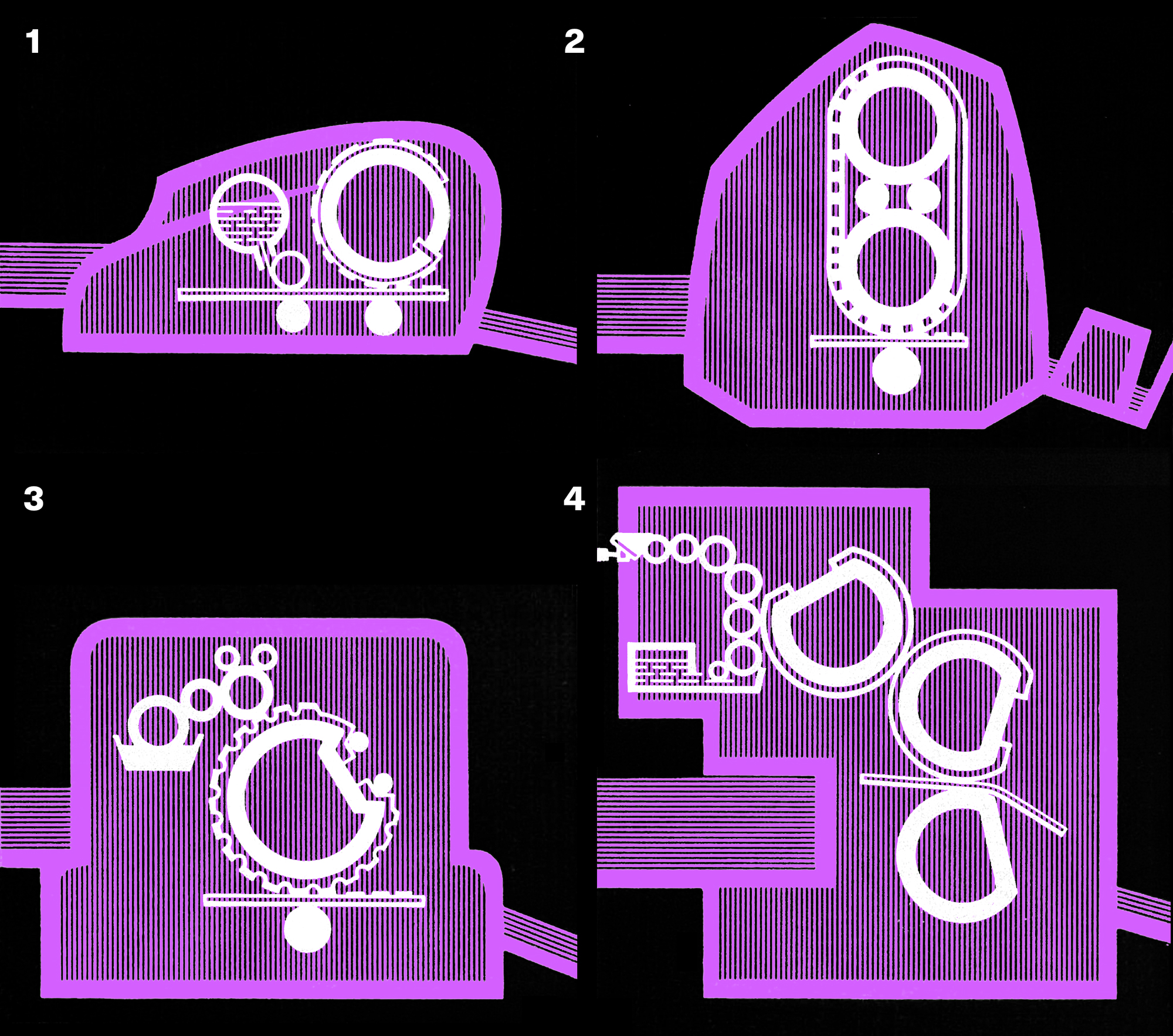 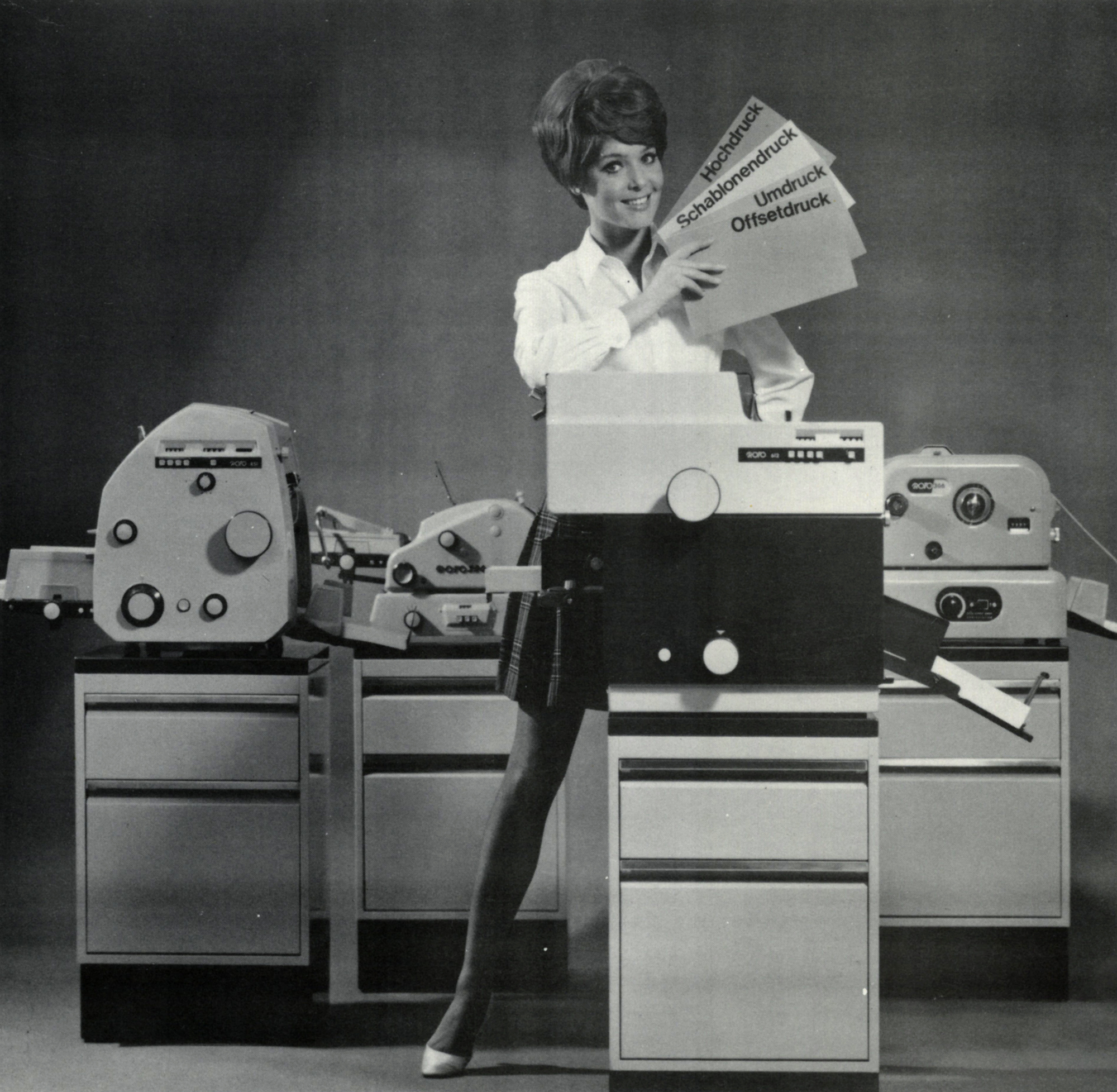 Advertisement for Roto’s flagship line of all four duplication processes from 1969.

In order to offer all duplication processes, an Office Offset machine had to be developed. In the case of Roto, this was the Roto 610. This new machine was presented to the public at the Hanover Fair in April 1967 with the slogan: ‘The Roto 610 is an Office Offset printer – as easy to operate as a duplicator.’ 7 It was a complete success as one could read shortly afterwards in the company newspaper Im Roto Kreis:

‘The Triumphal procession of the Roto 610. That’s what you could almost call what’s happening right now. We couldn’t think of a better word than that paramilitary word … One of our dealers in Northern Germany sold 12 Roto 610 in a short time … The fact that we found a gap in market coverage with the Roto 610 is reassuring. Now, with the Roto 610, there is an Offset Office printer that is as easy to use as a duplicator – at a very low price.’ 8 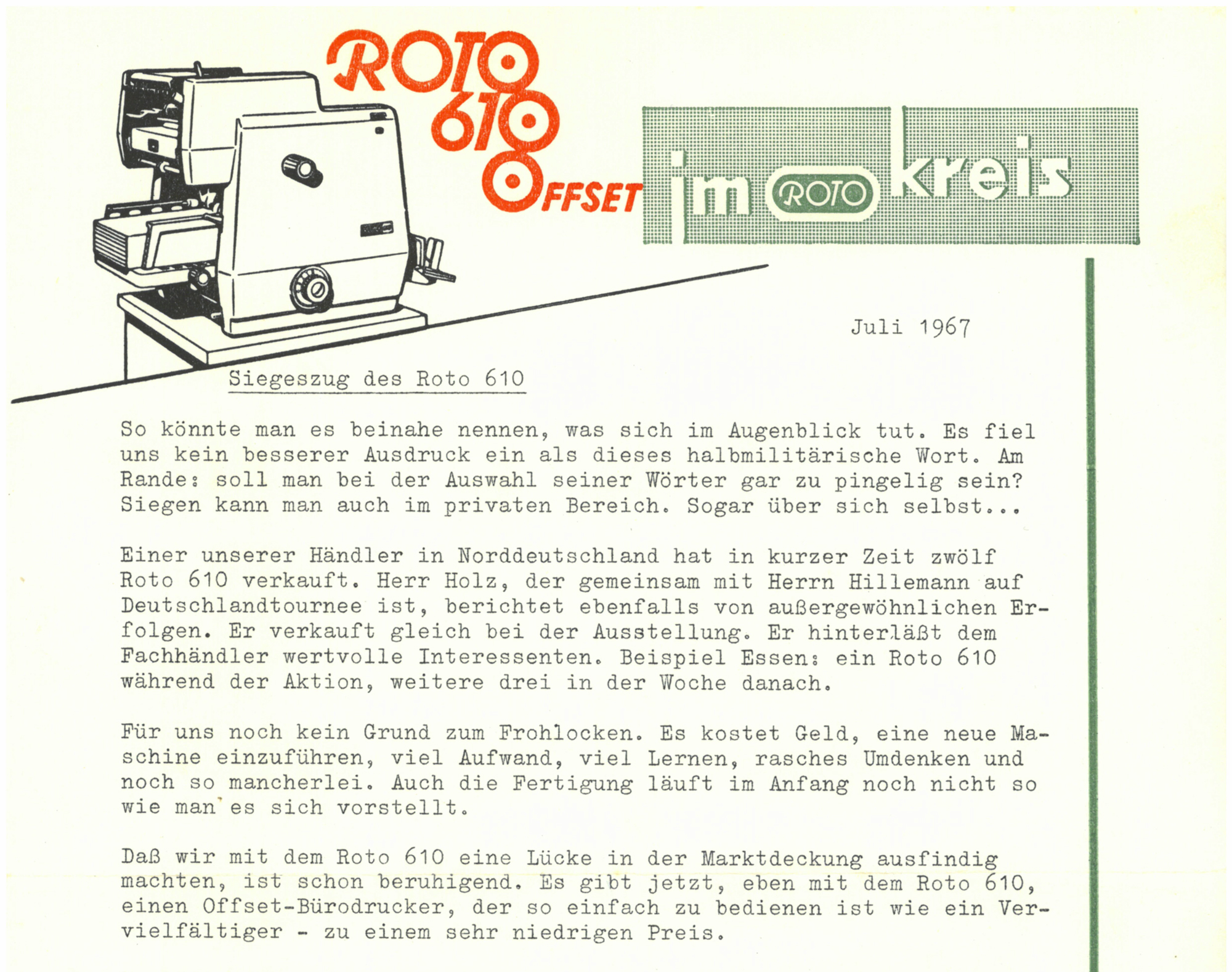 Im Roto Kreis was the internal company newspaper, which kept the employees up to date about business developments and all sorts of gossip. 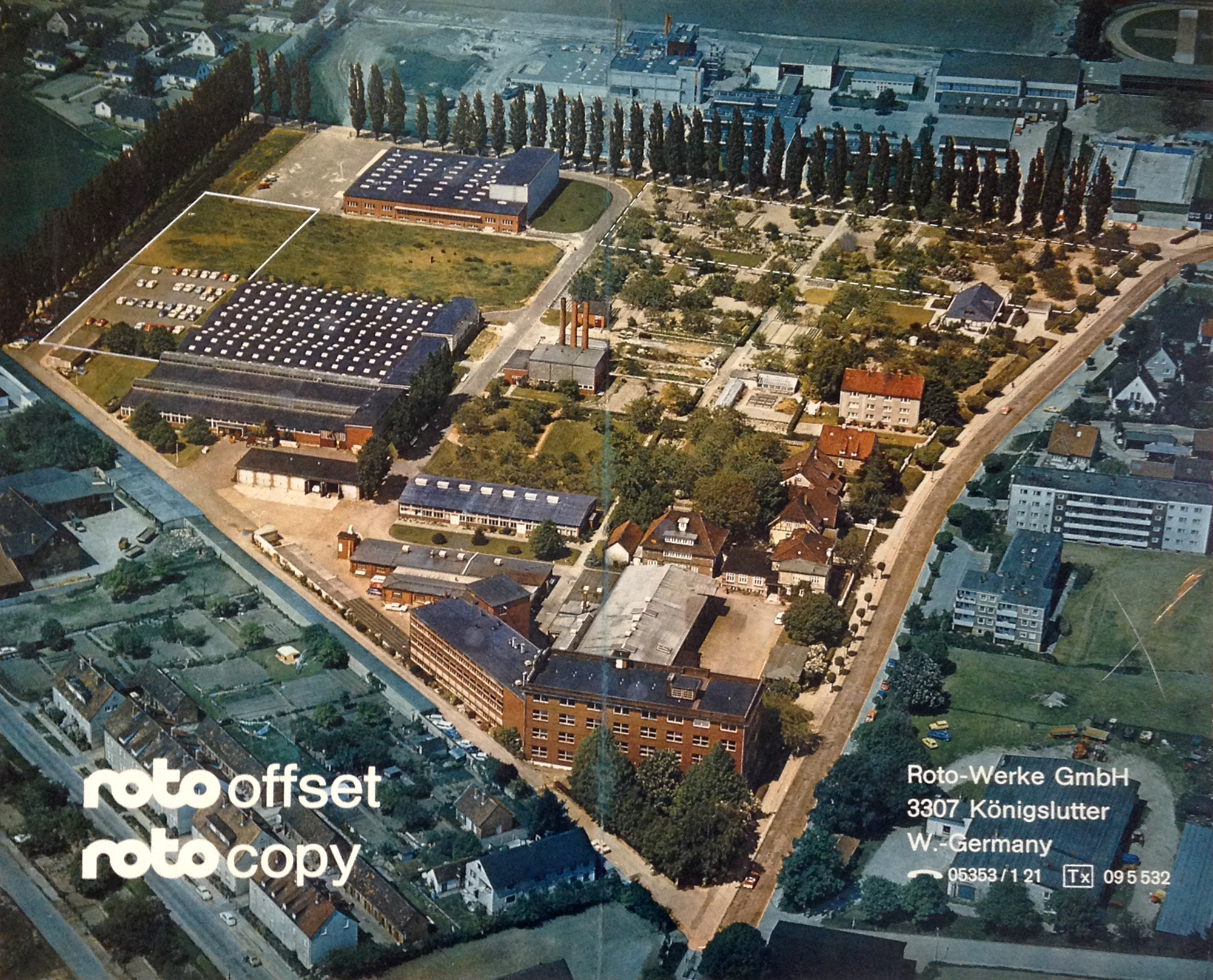 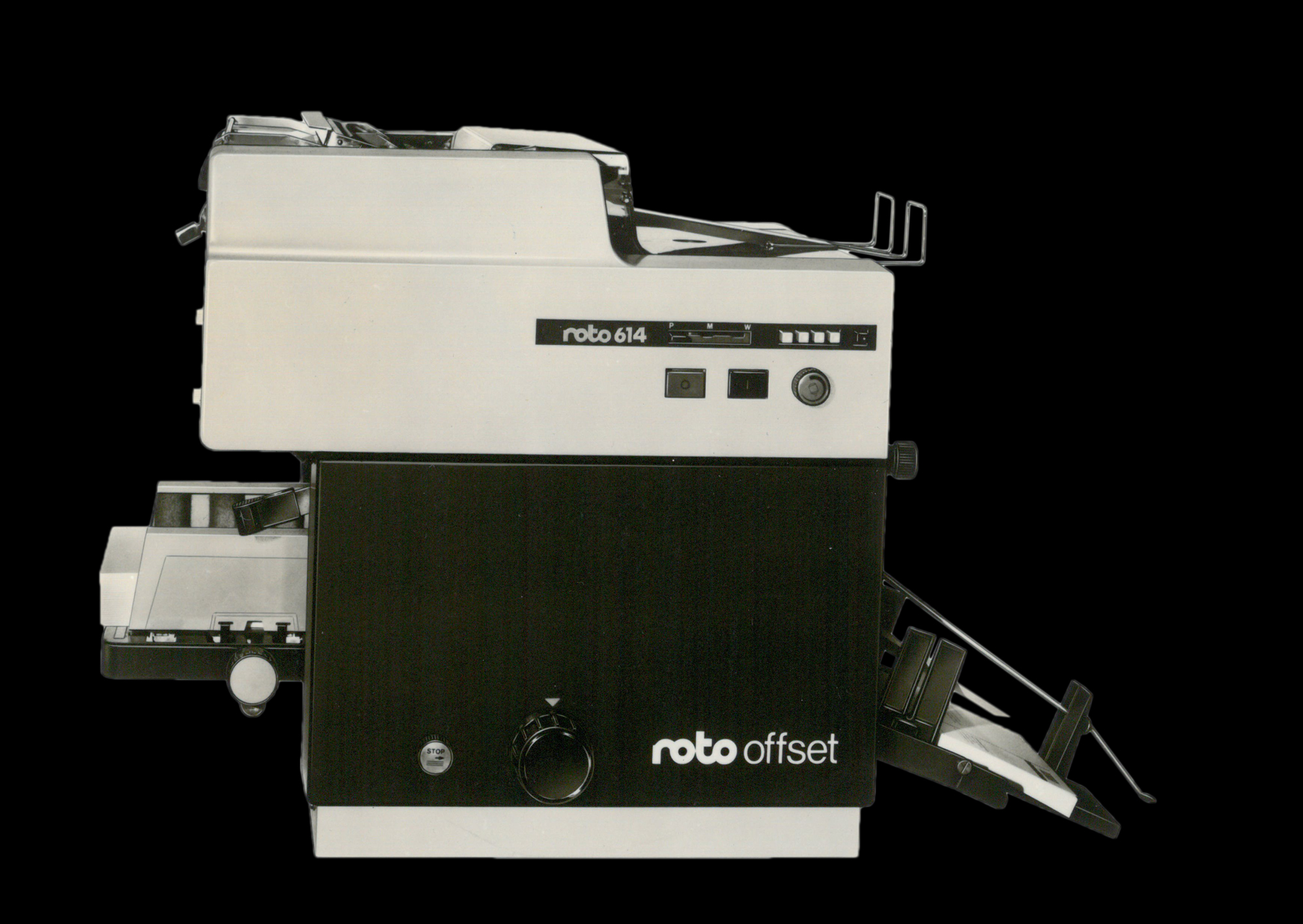 ‘Because with this machine, everything really does happen by itself. The operator practically only has to press a button and everything runs smoothly. Only printing films have to be replenished, which is no problem, as the machine has a quick-clamping device into which the film only has to be pushed. All other operations such as etching, printing, blanket cleaning and switching off are done by the automat alone. The working speed is between 60 and 120 prints per minute, the print height can be adjusted by plus/minus 30 mm. Paper with a weight of between 40 and 250 gsm and up to a maximum format of 280 × 330 mm can be processed; the largest printing area is 240 × 322 mm. The machine is designed to be very service-friendly, measures 85 × 65 × 50 cm and weighs 90 kg.’ 13

The success of Roto-Werke in Office Offset printing did not come by chance. The easy handling of the machines, the high level of printing quality, and the range of peripheral machines such as paper joggers, folding machines, thermal binders, platemakers, etc, are factors that played a key role.

‘In 1975, 893 offset users in 71 courses were instructed in the functions and the handling of the Roto offset process … The aim of these workshops is to familiarise the operator of an Office Offset machine with all the possibilities offered. Even beyond the function of the machine. This includes instructions in how to prepare simple print jobs as well as the preparation of offset plates which are required for the production of representative printed matter.’ 14

Roto also saw the trend towards photocopiers, adding its own first models to its range in 1975. In 1978, following the its merge with Lumoprint and Züfra (both exclusively copier manufactures), the company began to combine its Office Offset machines with copier technology:

‘Sometimes copying is the way to go, sometimes offset printing is better and cheaper. To have the choice at any time and still be able to work with the same equipment combination is a fine thing. Roto thinks so – and offers Offsetcopy, the fast combination of both techniques. This makes it possible to produce ten copies/prints of 20 different originals on normal paper in only eight minutes. According to Roto – the combination is particularly interesting for users with comparatively low copy volumes.’ 15 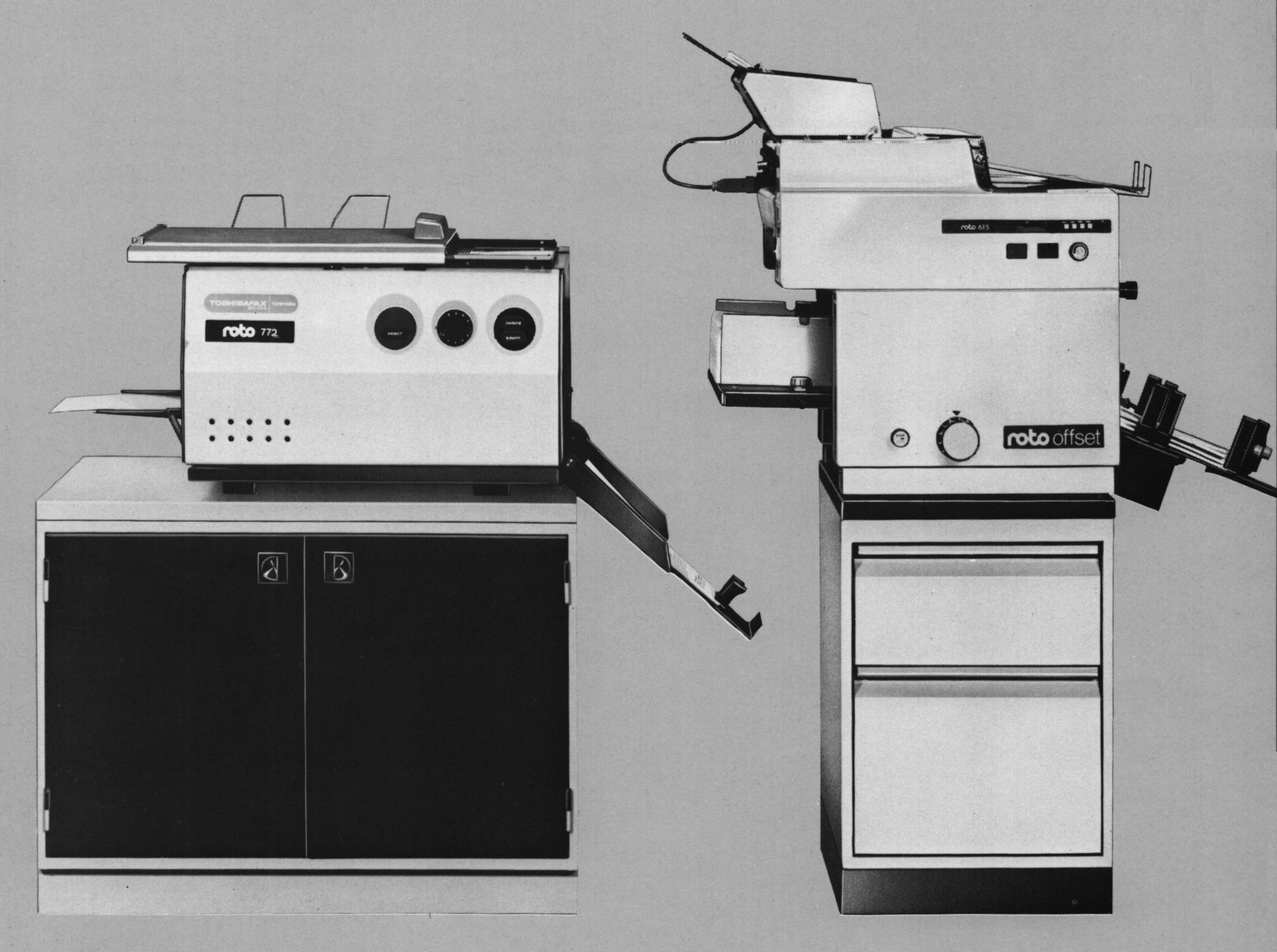 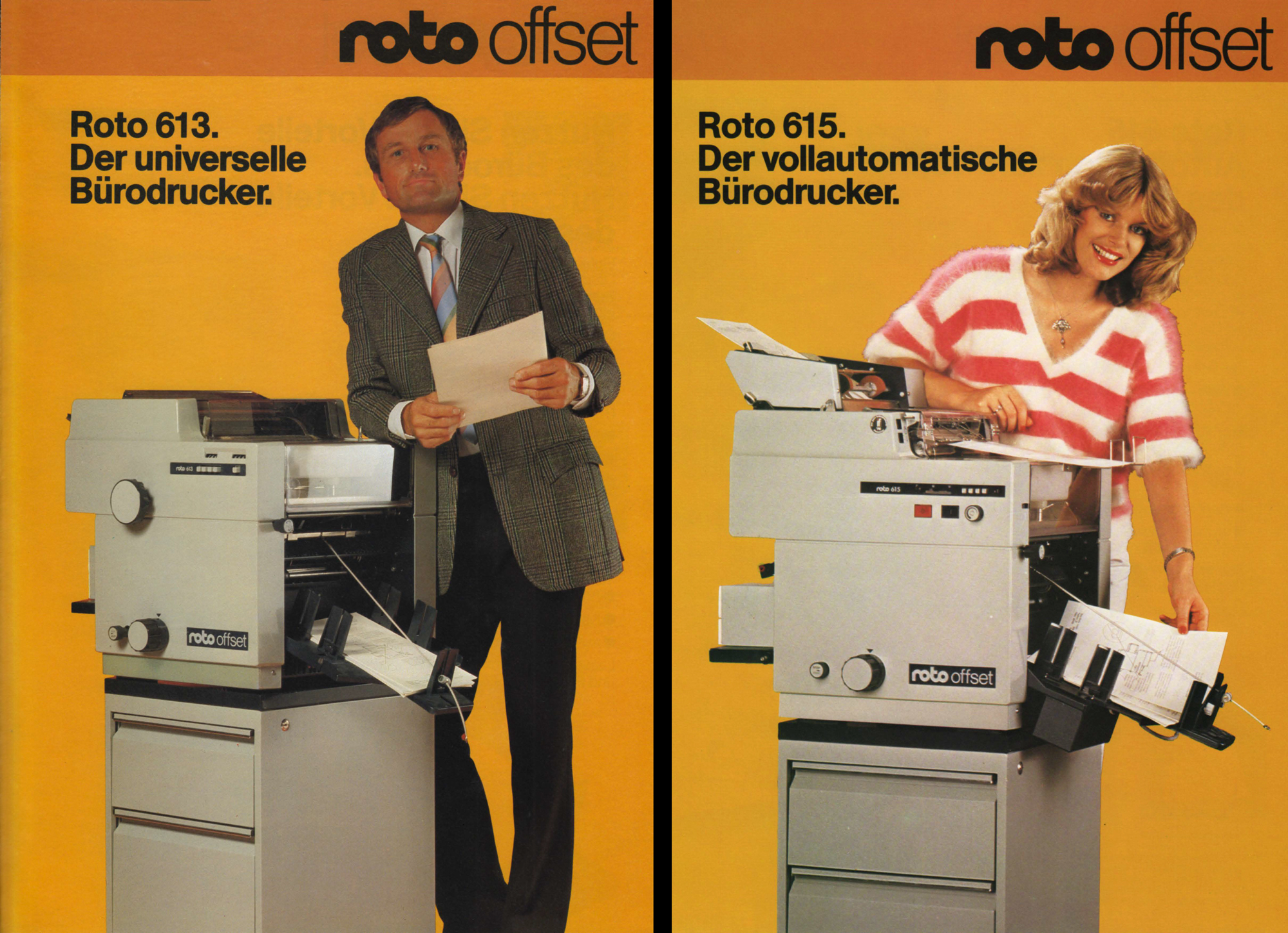 Thanks to good sales figures and the position as market leader, in 1980 the management of Pelikan AG Hannover (the main shareholder at Roto) undertook considerable expansion measures. Factories and companies in Germany and abroad were acquired. Several previously independent companies were merged into ‘strategic units’. Thus the Roto-Werke, with Lumoprint and Züfra, merged to form the new company Pelikan-Informationstechnik (PIT) with headquarters in Hamburg. As a result, three respected company names were deleted from the commercial register. All decisions concerning the Roto-Werke were also made away from the workshop, in Hamburg. 18

In less than two years the merger had proven itself to be a momentous mistake. When Pelikan AG Hannover announced it was filing for insolvency, employees were taken completely by surprise. As all financial decisions for the entire group had been concentrated in Hannover since the strategic merger, the resulting settlement meant bankruptcy for the company Pelikan-Informationstechnik as well as Roto-Werke. PIT tried to continue under the name Roto International GmbH and presented at the Hannover-Messe 1983 the Roto 613 S. 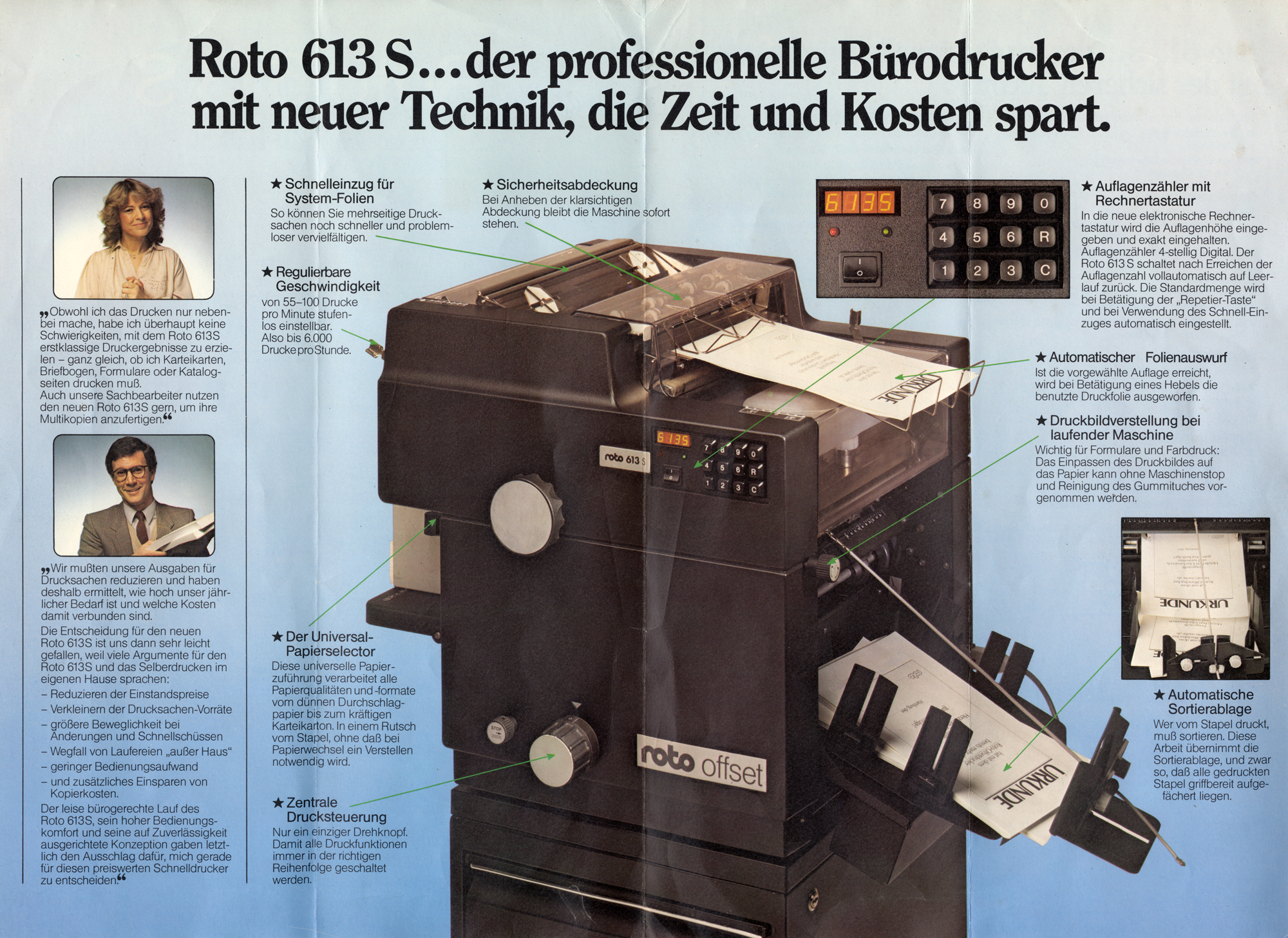 With an office-friendly design in black, new features and an electronic ‘brain’, the Roto 613 S was marketed to save time and money. 19

But only two years later in 1985 it was clear, that it was no longer possible to operate such a business as a small independent company. Roto instead joined forces with its former competitor Rotaprint to form the new company Roto/Rotaprint. Together they developed one last model: the Roto/Rotaprint 625, which was the most technical and electronically advanced Office Offset machine ever built. But it also marked the end of the Office Offset era. 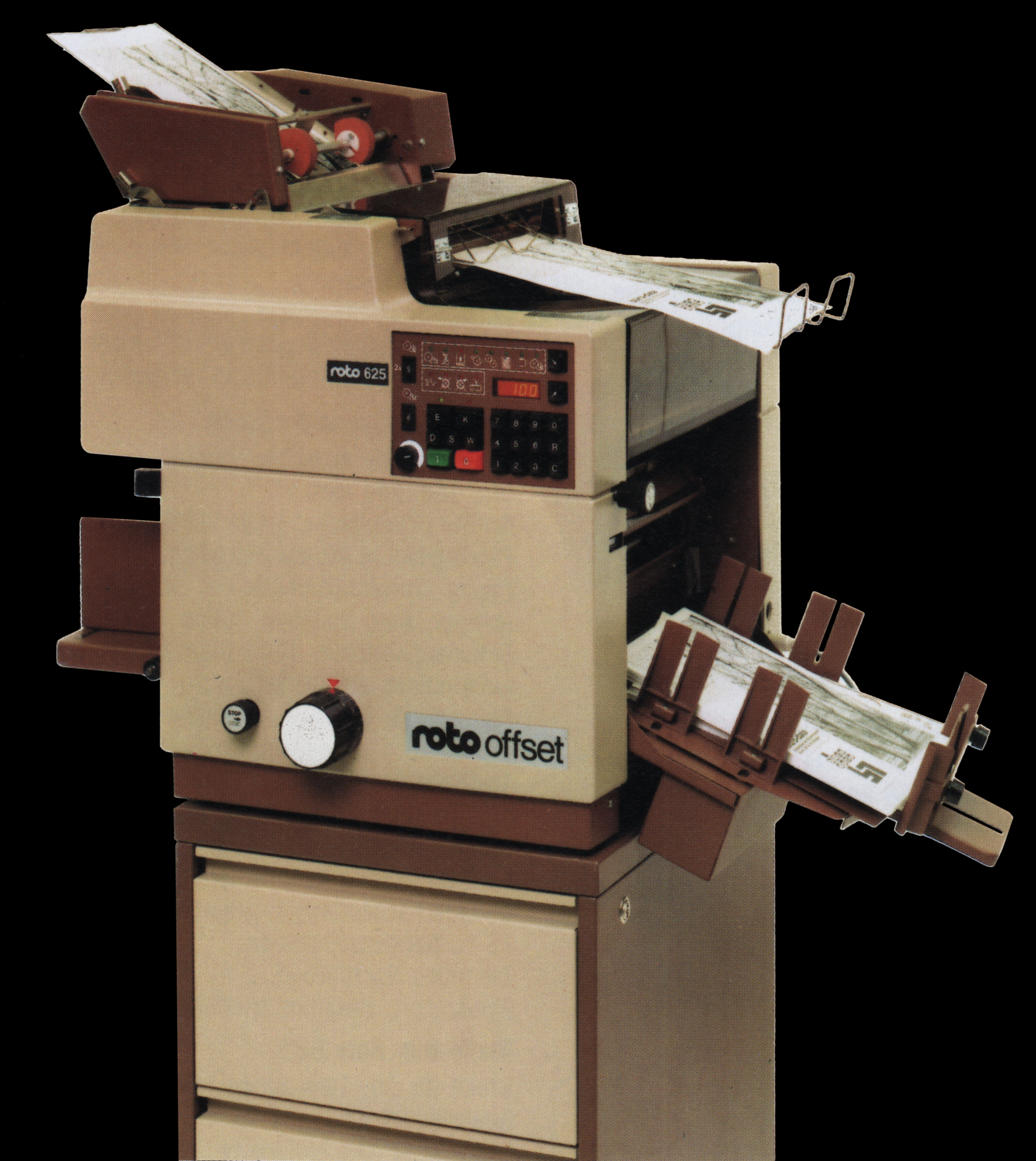 © Office Offset. All rights reserved. No part of this article may be reproduced or utilised in any form or by any means without the prior written permission of Office Offset.