In 1918 Conrad and Heinrich Hartmann founded Gebrüder Hartmann in Hanover. Combining the first two letters of both words, they abbreviated the office name to Geha, which they registered as a trademark in 1919.

In their first year of business the brothers focused on shipping office supplies, such as carbon paper and typewriter ribbons, which they handled with a few assistants. By 1920 the young company had grown to 30 employees and had established itself as one of the largest mail-order companies for office supplies and stationery. This was due to skilful sales promotion through samples. Despite the prevailing inflation of the period, the brothers made significant profits by emphasising exports. Although neither had manufacturing experience, in 1922 Geha began producing its own chemical-based office supplies, such as carbon and hectographic papers, and permanent stencils. In 1931, with more than 250 employees, the company manufactured its first duplicating machine, a stencil duplicator called the Geha-Rotary.

The Nazi era and the Second World War naturally left their mark on the Geha factory. Numerous employees fell victim to the war effort and, as a result of the economy, the production of office supplies shifted to arms. But by 1950, after a prolonged period of economic turbulence, the company’s situation improved. With 720 employees – more than ever before – Geha expanded its production and started manufacturing new items, including fountain pens with a reserve tank. Over the 1950s and 60s, Geha workers more than doubled to 1,900, prompting the company to expand and export worldwide. 1 By this time, Geha had become one of the leading manufacturers of office supplies – from  ink cartridges, permanent stencils and duplicating ink to spirit carbon writing sets for spirit duplicators and typewriter ink ribbons, to name just a few.

The product range also included all types of duplicating machines – stencil duplicators, devices for the production of stencils, spirit duplicators and daylight projectors. In 1970 the first Office Offset printing machine was manufactured at the Hanover plant. Named the Geha Model 2000 SR, the machine met all of the requirements placed on a modern Office Offset printer, according to a review:

‘The Geha Automat 2000 SR from Geha Werke GmbH, 3000 Hannover, P.O. Box 123, is designed for Office Offset printing. The following 10 functions are programmed in the program disk of the automatic control unit: the drive, the pre-selected ink and fluid supply, the chemical pre-treatment of the printing foil (etching), the inking of the printing foil, the transfer of the printed image to the rubber blanket, the triggering of the paper feed, the control of the pre-selected print run, the washing of the rubber blanket, the switching off of the machine. It is only necessary to insert the printing foil and press the start button. The nine-roller ink-fluid unit including two distributor and two applicator rollers ensures excellent print reproduction. The inking unit can be easily replaced for two and multicolour printing. The paper table has a capacity of 1,000 sheets. The infinitely variable speed control allows 3,000 to 6,000 prints per hour. Horizontal and vertical adjustment of the print image is possible while the machine is running. The machine costs DM 6.380 (£ 731) + VAT in its basic configuration’. 2 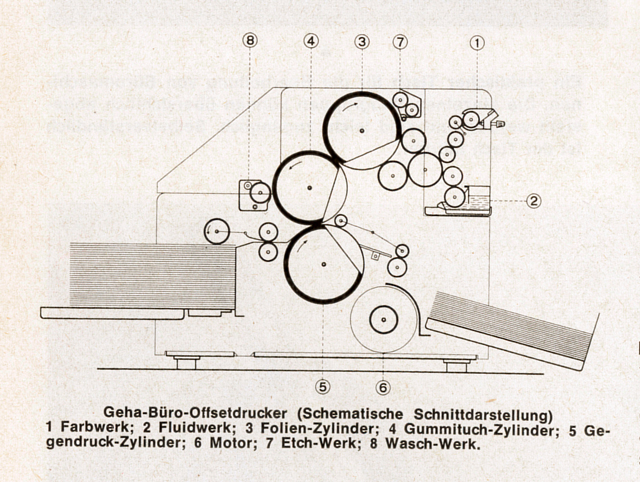 Later that same year, on July 15, 1970, the Model 2000 SR was awarded the ‘Gute Form’ federal prize of the Federal Ministry of Economics. According to the jury:

‘This category of apparatus demands uncompromising dominance of function. This places particularly high demands on design discipline. The company has succeeded in demonstrating the importance and positive influence of such discipline across a whole range of machines of different performance and areas of application. With the award of the Federal Prize for the Geha 2000 SR machine, the honourable mention is extended to the machine types B/62/1, B/62/2, B/62/4, B/62/5, B/62/6.’ 3

Geha was leading the trend towards Office Offset printing machines that were increasingly easy to operate. By the end of the 1970s, Geha-Werke produced the Geha 2400, a fully automatic model that mets the demands of the duplicating market, and sold for DM 13.800 (£ 3,497). 4 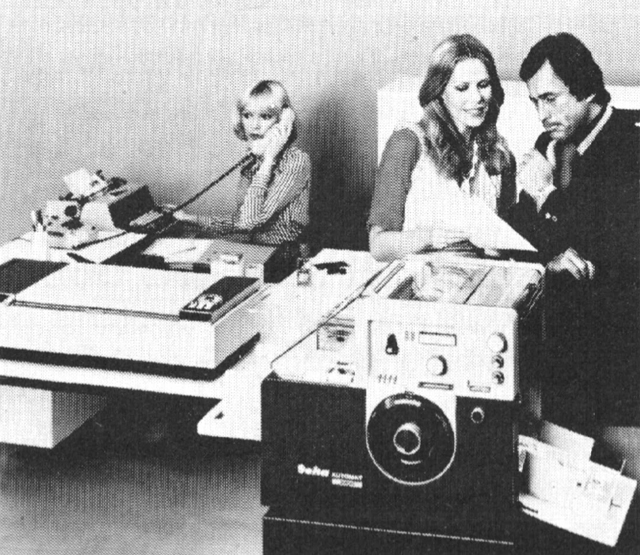 ‘Geha is presenting a new fully automatic machine at the Orgatechnik trade fair in which operation is reduced to a few simple steps: All you have to do is apply the printing foil, preselect the print run and press the automatic button – everything else is done automatically, even washing the rubber blanket and ejecting the printing foil after printing. The entire functional sequence of the Geha machine is controlled automatically via a program switch. The “ElectronicPackage” is also new: electronic speed control, infinitely variable preselection of the printing speed, particularly even ink application thanks to automatically reduced speed in the pre-print phase. Any desired position of the foil cylinder can be set, which is important for correcting printing foils in the machine.’ 5

The era of Office Offset printing that began with Geha also came to an end there, with the last two models – Geha 2700 Electronic and Geha 2800 Electronic. Work processes inside both the machines are further automated, and the complete work processes of the machines are controlled electronically. Geha then revised the design, which led to the iF Design Award for the best product in the communications category for 1984 and 1985. 6 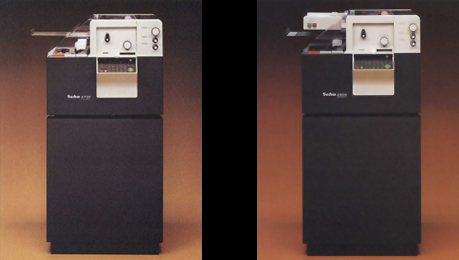 However, the increasing expansion of the product range in the field of office machines and office supplies in 1970 and 1980 had a negative impact on Geha’s business. The economic consequences of the 1973 oil crisis caused financial difficulties. And after several unsuccessful attempts to restructure, Geha’s competitor Pelikan took over. In the 1990s Pelikan ceased production on the former Geha factory premises and the buildings were either demolished or converted into business premises.

© Office Offset. All rights reserved. No part of this article may be reproduced or utilised in any form or by any means without the prior written permission of Office Offset.